The comparison is from Isaiah: " Everyone... thirsts for water (Isaiah 55:1)." The Talmud, Baba Kama 82a, explains this as spiritual thirst, all who seek it should drink of Torah's refreshing teachings.

(1) Just as rain water comes down in drops and forms rivers, so with the Torah; one studies a bit today and some more tomorrow, until in time becomes like a flowing stream.

(2) Just as water has no taste unless one is thirsty, so too, Torah is best appreciated through great effort and yearning.

(4)  Water is a great equalizer, no matter your station or class - all can drink water. So, too - a scholar should not be ashamed to say to a simpler fellow, 'Teach me a chapter, a verse or a letter'.

(6) Just as water restores the soul, so does the Torah.

(7) Just as water is cleansing, the words of Torah are purifying.

The Water-Drawing Celebration in Jerusalem's Temple

In Jerusalem's Holy Temple of Old, “Pouring of the Water” (nisuch hamayim) was an important Sukkot celebration.

Throughout the year, the daily offerings in the Temple were accompanied by the pouring of wine on the altar; on Sukkot, water was poured in addition to the wine. The drawing of water for this purpose was preceded by all-night celebrations in the Temple courtyard, with music-playing Levites, torch-juggling sages and huge oil-burning lamps that illuminated the entire city. The singing and dancing went on until daybreak, when a procession would make its way to the Shiloach Spring which flowed in a valley below the Temple.

“For all the days of the water drawing,” recalled Rabbi Joshua ben Chanania, “our eyes saw no sleep,” for the nights of Sukkot were devoted to the singing, dancing and merrymaking in preparation to “draw water with joy.” And the Talmud declares: “One who did not see the joy of the water-drawing celebrations, has not seen joy in his life.”

The Effect of Water on a Rock

The great Sage Rabbi Akiva, transformed himself from a simple, ignorant shepherd into one of the most outstanding and influential Sages of all time. Rachel, the only daughter of Kalba Savua, one of Jerusalem's foremost families, offered to marry the uneducated Akiva if he would devote his life to the study of Torah. At the age of forty, Akiva felt that such an endeavor was hopeless. One day, though, he observed water dripping onto a stone and noticed that the steady trickling had made an impression in the stone. "If drops of water can make an imprint on a stone," he reasoned, "then even I can learn Torah."

Meeting at the Well

Eliezer found a bride for Issac at the Well, and Jacob met Rachel at the Well. In ancient times, the well was a town center where shepherds would come to water their flocks, and where townsfolk would come to draw water for their everyday needs.

There is a deeper meaning to this, as well. Jacob's removing of the heavy rock covering the well, was not only a sign of his strength or his interest in helping Rachel, but it also represents the quest to search deep within, beyond the surface to uncover and reveal the hidden, deeper life-giving 'waters'.

The Communal Prayer for Rain

"Tefilat Geshem" the Prayer for Rain said on Shmini Atzeret, the concluding days of the Sukkot festival, is a beautiful prayer that demonstrates the centrality of water in Torah and to the people of Israel.

"Remember - Moses - drawn forth in a basket from the water. They said, 'He drew water and provided the sheep with water.' At the time Your treasured people thirsted for water, he struck the rock and out came water. For the sake of his righteousness, grant abundant water!" 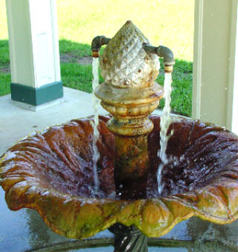 When the Romans forbade Torah study, Rabbi Akiva continued to study at the risk of his life. When a fellow Jew Papus asked him why he put himself in peril, Rabbi Akiva answered with a parable:

A hungry fox, standing on the riverbank, called out to the fish, "Fish, why do you subject yourself to such a dangerous existence? Don't you know that a little further down there are fishermen just waiting to catch you? Join me on the river-bank and you will be safe."

Replied the fish, "What you say about the fisherman might be true. But if I am not immersed in the water, then surely I will die. My only chance to live is if I am in the water despite its peril."

The Rabbi of a town was about to set out for a journey to his Rebbe in a distant town. His friends and colleagues asked him, "Aren't there enough Rabbis here? Why make the big trip?"

He explained using a parable. Fishermen often say a good time to fish is just after the rain, since the fish come up from the water's depths to seek out the fresh droplets of rain water. Now, why would they do that? They live in water and have water all the time! Yet, there is a difference. The rain water is fresh and invigorating.

This man felt that the Rabbi to whom he was traveling to at a great distance offered more refreshing water for his soul.